Investing pundits like to quote the yield curve as a nearly infallible indicator for the next recession. But what do the data say? And which yield curve should you use? In this multi-part series we try to answer these questions in as straightforward (though not necessarily simple) a manner as possible. In the end, we hope that the result will be a more useful way to understand what the yield curve can do to help investors protect capital or mitigate risk.

As little as a few weeks ago, the yield curve inverted raisng alarm bells of an impending end to the current economic expansion, gaining precious air time on the financial news, and receiving countless accolades as the infallible recession indicator of choice.

Google searches spiked. As did graphs of prediction probabilities. Not surprisingly these virulent headlines coincided with a dip in the market, rubbing an already sore wound.

But really, how accurate is the yield curve anyway? And which yield curve should you use?

What is a yield curve? (Skip if you already know!)

A yield curve is a line that connects the yields varying maturities across a series of bonds. “The yield curve” is that line for government securities. In the USA-centric news sources and others, that’s Treasuries. The curve is generally upwardly sloping and often not a straight line for a bunch of reasons – risk, segmentation, liquidity, or other issues too complex to be detailed here.

When the curve inverts, a shorter dated maturity usually has a higher yield than a longer dated one, leading to a bump in the curve. Why it inverts is due to a host of reasons. But the inversion is often interpreted as a sign of impending doom – a recession looms!

Why should a recession follow from an inverted yield curve? There is no law that says it should. But investors and traders believe it does because it suggests:

A couple of other points to note before we get into the details of the analysis. First, there isn’t a consensus on which part of the yield curve to use as a recession predictor. But pundits often look at two maturities against one another, creating a “spread” as a short-hand for the overall yield curve.

The St. Louis Fed data base (FRED) tracks the spreads between Treasury securities maturing in 10 years vs. ones maturing in 3 months and 2 years as well as a bunch of others. In general, 10 years is used as the standard for a long-dated bond. Don’t ask me why other than it’s part convention and part liquidity.

Here is a graph showing the spread between 10 year and 3 month maturities with recessions shaded in light grey. 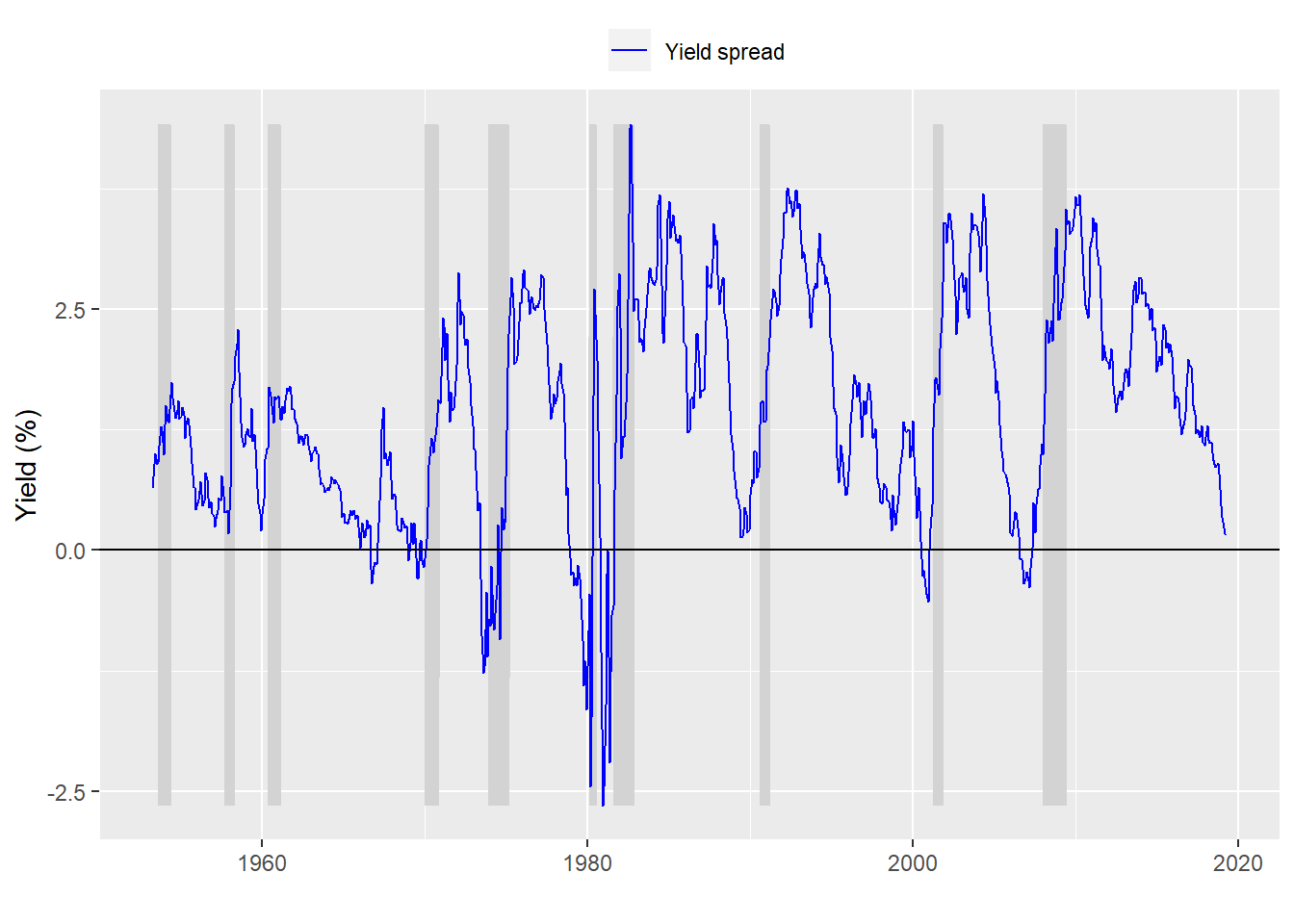 Show me the data! (Start here if don’t want the background)

Should investors care about the yield curve? Probably. The point of this research is to figure out by how much. A Google Scholar search (“yield curve recession predictor” from a US located IP address) returns 24,300 results with some papers receiving over 1600 citations. Searching “peanut allergy” returns 60,800 results but the most cited paper on the first page has less than 1300 citations.

A recent NY Fed paper on the yield curve introduced a “novel nonparametric bootstrap that is robust to general forms of time and cross-sectional dependence and conditional heteroskedasticity of unknown form.” We’ll just look at a table of numbers.

We use the spread between the 10 year and 3 month Treasury maturities. We score inversion as any point when the spread is negative meaning the 3 month yield is greater than the 10 year yield. Why did we use this spread (aka, “term spread”)? For one it’s the easiest starting point, and, secondly, it’s one of the spreads the NY Fed uses.

Interesting. Let’s look at some metrics often used in biostatistics and disease detection.

Just counting the data suggests that this spread (10-year minus 3-month) shouldn’t help us predict recessions that reliably. Nonetheless, the NY Fed uses precisely this spread and publishes recession probabilities based on it.

We’ll look at the data with the view to building a predictive model in the next post.